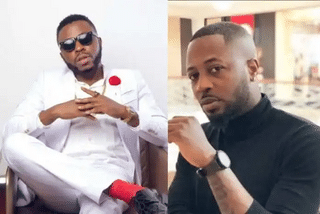 Samklef, who was behind most hits especially those made by Wizkid, delved into disseminating of viral contents on social media after quitting his musical career in April.

Ubi also launched a platform, “Talks With Ubi Franklin” on social media where he interviews celebrities.

Taking to the photo-sharing app, Samklef dragged his friend of 13 years, Tunde Ednut for restricting him from viewing his page because he feels threatened.

“I believe the sky is large enough for everybody to shine. No be only one brand of moto dey this world! Jay-Z has Ace of spade, Puff Daddy has Ciroc and Rick-Ross has Belaire Rose and all of them are making money and still friends in business. I’m shocked that someone i thought was my guy’ who came to see me in my hotel’ even brought a drink and we drank together, we celebrated his new car and took photos together blocked me on Instagram 3days after, without any issues. Reasons why because he feels that I’m a threat! I have never had any issue with him since we have been friends since 2007. Nawa oh! I just can’t believe he still carry that Niaja competitive mentality enter yankee after all these years. We grow by lifting others, my guy block me’ even block ubi Franklin 2…no wahala! God dey. Aye kpo gan!”