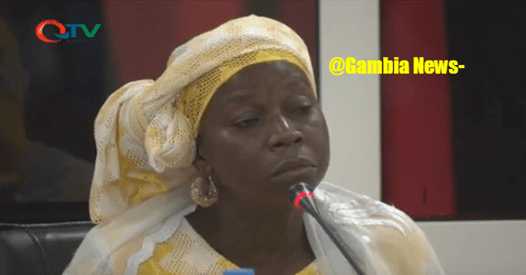 A woman who was allegedly subjected to gruesome battering by Yahya Jammeh’s feared thugs has shared her story almost three years after the ex-leader’s exile. Relaying her story to a commission probing right violations from the time Jammeh occupied Gambia’s helm, the 47-year-old Fatou Camara said she had gone out to fetch an item from a nearby shop for a naming ceremony when she spotted a crowd of demonstrators waving banners from the opposition United Democratic Party (UDP) Camara was seized from behind by armed police personnel sent to quell the protest as she sat watching from the fringes and bundled in a waiting truck along with others. She said she was taken to the the Kanifing headquarters of the armed police before being driven to Jammeh’s spies agency office in the capital, also dubbed the torture chambers.”I was fasting on that day and asked to break my faster in which I was given water. I followed it up with a prayer. Soon we heard shouting from the inner room. Then I told a colleague detainee trouble looms. Later we were called in and it was our turn, it began with investigation of “who sent you to demonstrate” to which I answered I don’t know,” she told commissioners. She told the hearing how she was forcefully asked to get off the chair she was seated during the investigation process prior to being called by an unknown individual towards the entrance and unsuspectingly had her head covered with a bag.”When he called Me I made for the door. I didn’t know someone stood behind the door and covered by head with a bag in which I was led to another place within the spy headquarters on a large bed. Then he send for sticks but first he asked me to open my mouth. I refused. I was flogged till I fainted. I came round after the breeze from the window hit me. I tried removing the thing on my head I couldn’t. Then I could hear them (her torturers) saying “Oh she is alive!” Then they descended on me again and one of them kicked me. Next I fainted. When I regained consciousness, I was held by two people on each side and taken before their bosses (the spy team’s head). I couldn’t talk, then I fainted and only woke up in a hospital. I urinated blood for 15 days”
[Video] Wow! Watch How Mr Mario Shut Down Felabration In present Of Barry jhay, Small Doctor Olamide
Trey Songz shares adorable new photos with his son as he turns 6 months old